Periph just gained super powers (in the literal sense) to enable increasing or decreasing the power push on the GPIO pads. This will be available in the next release.

There are 2 output functions that can adjusted:

The broadcom processor has flags to configure the physical properties of the GPIO pads. periph’s bcm283x driver now expose a function to configure these. The driver also gained the ability to disable input hysteresis but this is for another post.

The program (attached at the end of this post) runs 4 pulses in 4 different GPIO pad configurations:

The default is 8mA with slew unlimited.

This screenshot was taken without any load, e.g. nothing connected to the pins except the oscilloscope itself: 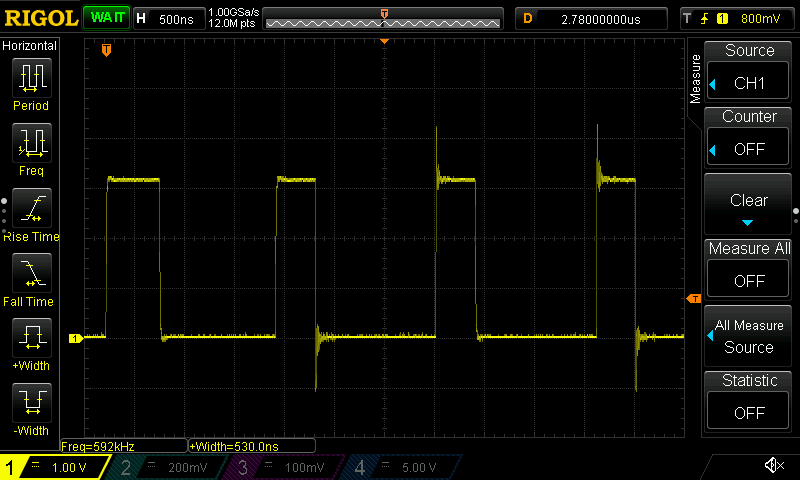 When no significant load is on the GPIO pad, both the 16mA setting and unlimited slew increase the signal overshoot (going over 3.3V or under 0V).

The 16mA had a large effect on the High→Low transition, while the slew limit had more effect on the Low→High. Enabling slew limiting and reducing the current drive gives a vey clean signal as seen on the first pulse.

Keep in mind that these oveshoot are by definition transient and will vary from pulse to pulse.

With a LED driven by the GPIO, the tension (Volt) of each pulse is much lower, and the 2mA clearly has more trouble driving the LED, not able to attain 3V and the 16mA barely makes ~3.1V. 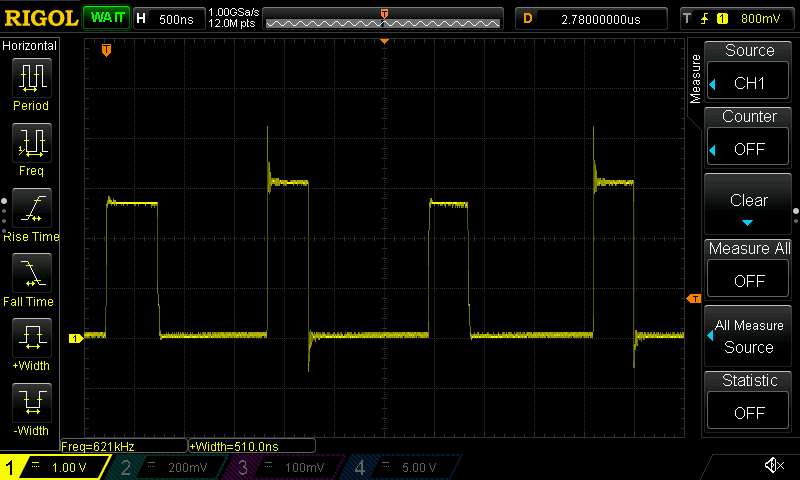 The effect of slew limit is not visible at all when there’s a significant load on the GPIO pad.

As we saw above, slew limiting is mostly effective when the current draw is very low, that is, the impedance of the load is high.

You can play with the program below to see the effect, this is especially visible in the loaded situation when switching from 2mA to 16mA, as a following pulse has a voltage bump in it.

The fact that GPIO 0 to 27 are configurable as a group and that the Raspberry Pis do not expose GPIO 28 to 45 is a downer, as this would have provided a mean to use two different configurations simultaneously, i.e. one group setup for communication and one for high current load.

The Raspberry Pi power source is designed for a fairly low average current draw per GPIO pad, so do not expect to be able to drive several GPIO pads at 16mA level without smelling some burnt odour.

On the other hand, the overshoot is not necessarily bad and can help in some situations like when communicating over long wires where parasitic capacitance may affect signal quality. The actual transient effect will be affected by the load capacitance and inductance, so depending on what you connected, the result will vary.

In practice, the default values are good and it is recommended to look at the signal quality with an oscilloscope on a loaded system to find the best trade off, and not try to take a guess.

The program does a few things to make sure things work in a reproducible way:

In practice, the program is still very dependent on the goodwill of the operating system.